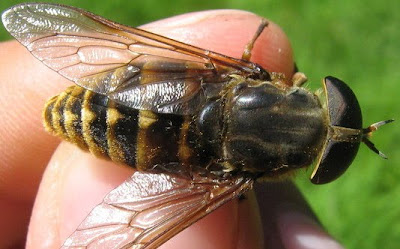 Here is one of the reasons that I am not riding now, we have these huge horse flies that the horse can't tolerate, me neither! Oh, one or two won't be so bad but there are countless numbers of them attacking Gilly when he comes out of the barn......I am not kidding with the numbers of them either! We live in an area where they love to live and breed. Down in a hollow, lots of foliage and trees, a creek and apparently us to feed on!

Those things are like razors cutting through skin, clothing and really HURT when they bite. I have had them cut (no lie) through my blue jeans and bit me! Putting a fly sheet over Gilly wouldn't stop the bites at all, they would cut right through the thin material....I mean if they can cut denim...scary thought!


The life span of these flies is from 30 to 60 days some a year. They seem to appear as early as May and last as long at into October! UGH!!!

Horse flies lie in wait in shady areas under bushes and trees for a host to happen by (me, Gilly and Pokey). Sight is the main host finding mechanism, but carbon dioxide, body heat and odor also play a role; and moving objects especially dark colors. (Poor Gilly, he smells good and is dark). Attacks occur during daylight hours with a peak beginning at sunrise and lasting three hours. A second peak is two hours before sunset and commences shortly after.On overcast days they seem to not want to feed (clouds, I need clouds!). Horse flies inflict deep wounds that cause a flow of blood. the mandibles and maxillae penetrate the skin in a scissor-like action. Anticoagulants in the saliva are pumped into the wound and the blood is ingested through a sponging labella. Pathogens may be transmitted from flies that are disturbed while feeding on one animal and begin feeding on another. Horse transmit Anthrax.There are NO effective biological control programs for controlling horse flies! (Oh, dang!!!) It says that cattle Egrets and Killdeer feed on horse flies......can I import some around here???

This is a horse fly trap that they say works? It only costs $295 and you have to provide the T posts! Think I'll get two!!! Well, they may work but I don't have that kind of money to throw around. Here is the link in case any one wants to check it out EPPS Biting Fly Traps

Where we live seems to be one of the worst places for these things, some of my friends how live up higher and more open don't have even half of what we have here.....so Gilly and I will have to wait until these beasties clear out. He can't concentrate on what I am asking him to do if he is being eaten by these flies, all I do is swat them off me and him. (sigh) so it's no fun for either of us. The other flies I can handle and the fly mask helps but these...the "Flies from HELL" they are unstoppable!!

I sure hope that all of you out there with horses aren't plagued with these flies. Guess me and the boys will be waiting for fall rides!

Oh Jane...that is horrid...I hate those..they drive the poor horses crazy!! I hope that trap works and you can go out and ride again..hugs, Sarah

EWWWWWW I remember those demon fies from when I lived in Louisiana we always called them deer flies.

Sarah, yes, they are horrible and the boys hate them. No, I'm not getting those traps, they are too expensive, maybe I can figure out how to make one myself! LOL

Amanda, we have deer flies too they a much smaller and not quite as mean as the huge horse flies!

Jane I feel your pain... literally!!!! I have a quarter sheet for Rosie and Bonnie when I ride. And my vet said to use regular OFF!! on both of us! Along with my normal fly spray (undiluted applied with a towel) which contains citronella and Permethrin. I also carry a fly swatter thingie made out of horse tail hair.

All of that and we are STILL annoyed!

Deer flies, mosquitoes, horse flies, face flies and the dreaded B-52s - the ones in your pictures - are out in force. They make the horses nuts, especially when they're chased by the B-52s - be prepared for a buck or a roll!

Jeni, I can't use anything with citronella in it on Gilly, he breaks out in hives from it. I have a horse hair shoo fly on a stick too and have beat them off me and Gil both. It's not much fun to try and ride or do lessons so, we will wait for a cloudy day! :-)

Kate, B-52's that's a good name for the huge horse flies. When I went out to feed Gilly tonight there were 6 monsters feeding on him. He was twitching and trying to get them off. I killed 3 of them just to have more show up. I think they send out a signal for more troops to appear!
Oh, yes, the buck and try to drop to the ground....been there before. That's why I give up for now...both of us are miserable. I wanna indoor!!!!

There is nothing worse than horse flies!!! We have head/neck/body fly sheets for our boys. They look funny with all the white on as they are black but they are pretty good on their clothes. We also spray with a Farnum product that you have to mix up

How horrible for you and for Gilly!

Those things are the size of bumble bees! Eeeek!
We have a few biting flies, but ours are much smaller and don't cause bleeding.

Poor you! It must be so frustrating to have trudged through the snow, ice and cold of winter praying for summer to arrive...and then you've got evil attacking flies to deal with!

I hope they move through their cycle quickly and die off soon! It's so not fair that you're having to deal with those creatures. Poor Gilly!

Do they also bite Pokey, too?

The way you feel when horse flies are biting!

okay, Jane...I truly sympathize. However, I cannot come here and read and look at bugs...grossing me out. wussy-butt that I am. Sorry.

And here I always complain about our little tiny flies! Although since we have started using fly predators, we don't have much of a fly problem, at least not until August. I wonder if the fly predators will kill your B-52's? But it would be too late now to introduce them into your manure, (they eat the fly larvae, and they sure eat good!)not sure what the recommended release date is in your area.
I hope those buggers go away soon for you. No matter how much I would love to have everyone's heat and summer like weather, I can do without those big, nasty bugs!

I see these on the concessions out here. I don't think I have seen even one on our farm. Some horses freak right out when they hear them. My old Naigen would drop to the ground on the spot when she heard one. Others go bucking around like maniacs. Indigo, luckily is sensible and knows I smack them off so she stands still. We had one land on her the other week when we trailered out and drove. She stood still so I could smack it then stomp it. Konk works good to spray them dead. Deer flies are also nasty too but not as big.

We get them too and they are ruthless. We've tried fly predators and sprays, you name it nothing seems to work on these little buggers. I'm getting a net to put over my head some day.

I read an interesting article that said flies were attracted to blue so if you venture out don' wear anything that color. Who knows if this is right either. Flies are just a miserable part of summer.

We have huge flies like that as well. In fact I've seen a few that are twice the size of your picture. Thankfully they haven't been too bad here this year. However, they always seem to get worse in August...

Flies, mosquitoes, gnats, chiggers... you name it, we got it. Everytime I feed or visit our horses, I give each one their fair share of "swat" time. And they all love it. I swat their underbellies, their necks, their legs, their backs, and I take great delight each time I kill a bunch of little flies. Today I didn't have my gloves on, but I still swatted at a big ole horsefly... I winced when I did it, ugh!!!! I hate the dripping blood they leave behind.

What a bummer for you...and poor Gilly too! And they last for 60 days?...that's most of the summer! Totally not fair. I'm glad we don't have them here in our dry climate.

But, we do have a pesky bugger that shows up in about July that are locally called "nose bots." What their technical name is, I haven't a clue. But they bit and lay eggs on the horses noses...and the horses go crazy...to the point that you can't be around them because it's too dangerous. They strike out and you could easily be the unintended victim. I think they're gone for the year now...we have a few deer flies, but nothing like what you're putting up with.

Hope you get some clouds for some good riding time!