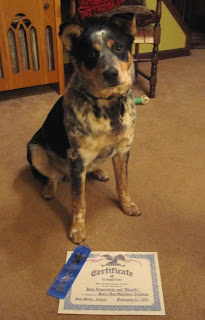 Charlie and I went to obedience class for 6 weeks and Charlie learned a lot and this is what he got for his efforts. A certificate and a blue ribbon, what a good boy he is! Would like to take him to more advanced classes and am thinking about it. He catches on fast and is eager to please.
He is also becoming quite the farm dog. So far, red fox 0, Charlie 1... blue jay 0, Charlie 1...opossum 0, Charlie 1...mole 0, Charlie 1. I hate that he killed the red fox but I wanted him to take care of the critters around the place and he is doing his job.

Yes, I know I haven't been on here again. Since last time I wrote on here, I have had surgery on a torn meniscus, September 30, the surgery was December 10th. Had the first two injections of Euflexxia or Hyaluronic acid starting two weeks ago. I have the third one next Tuesday, it is starting to help somewhat but will know more a couple of weeks after the last shot. Is it painful to get the shots? Not really, bit of a sting at first and some pressure in my knee as the fluid goes in but not bad at all.
I have only gotten to ride Gilly twice since I tore the knee up, back in October and once a couple of weeks ago. It's been a long painful 6 months, so much so that I haven't done much of anything, pain can do crazy things to you. Glad it's almost over or I hope it is. The orthopedic doctor said if this doesn't work a knee replacement is next. A lot of arthritis in my left knee from old traumas as a kid. 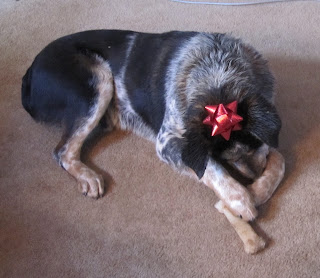 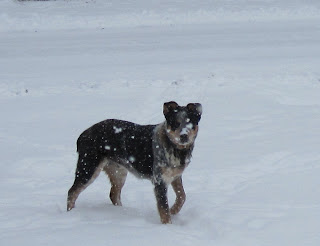 These next pictures are of Charlie's first snow. He LOVES snow and had a ball playing in it. If I made snowballs and through them up in the air he would jump really high and catch them! He is spring loaded for sure! 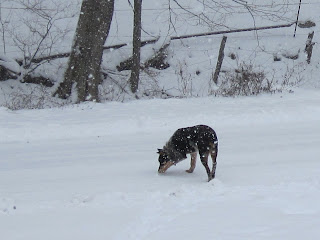 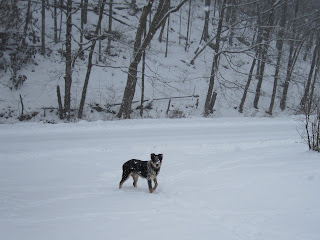 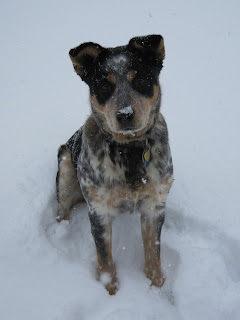 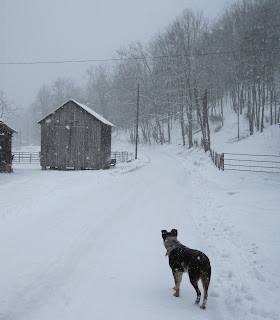 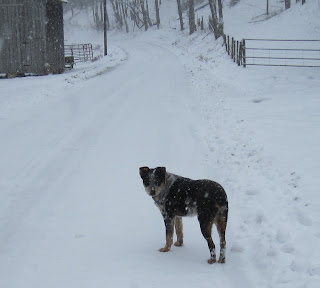 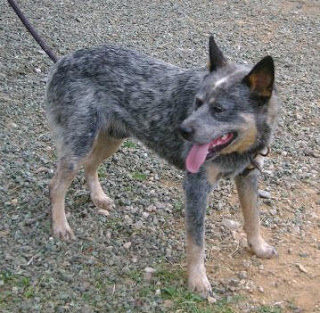 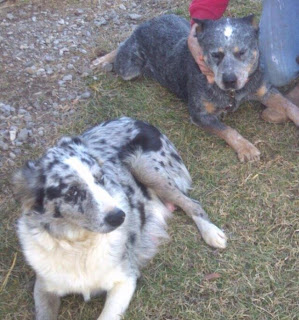 Of course Gilly has to be in here too, in the snow waiting for supper. 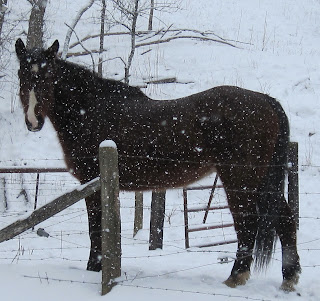 Thanks, he is so smart too. We hope to do more obedience classes in the future.

Hi you!!!!!!!!!!
Your Charlie is A-dorable! Truly inspiring about his class. Sitter he learned it well, but SOO did you!!!

Truly sorry to hear of your knee problems. It took my sister(61) all of 8 months to heal. She used her cold hydro pulsating pump every few hours. It was sent to her (must have cost $3 000) by the police dept workmans comp.

So sorry, but you'll make it...how the shots truly help. You're such a trooper, keep it up!
Bet Gilly misses you but glad you ride those 2 times.

So happy to read your news !!!

Jane ,please help spread the word to help stop horse slaughter. There is a bill in congress right now, we need many voices. Check my blog or go to Oklahomans Against Horse Slaughter 2012 and Beyond on Facebook and READ the posts, sign the Popvox vote, Congress will refer to that. Share with everyone you know who cares. Thank you !

May I simply say what a comfort to discover a person that genuinely knows what they are talking about
on the web. You certainly know how to bring an issue to light and
make it important. A lot more people must look at this and understand this side of
your story. I can't believe you aren't more popular given that you most certainly have the gift.