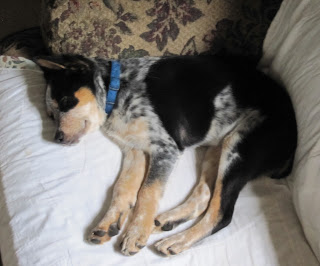 I swear I think he is growing while he sleeps! Look at those long legs, he is already bigger than Gonzo and Petey. Into everything too and picks on the other dogs. Lucy doesn't tolerate it much and she will put him in his place really quick when she has had enough of his silliness! 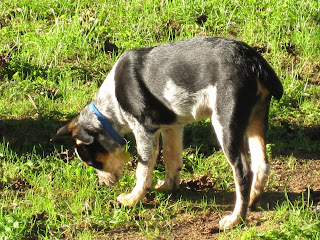 Looks like he has found something interesting in the grass. He loves to chew sticks and anything else he can find, carries rocks around the yard too. He has discovered the creek and you can't keep him out of it. 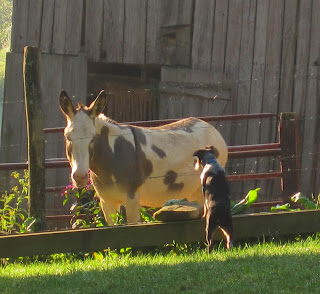 Charlie saying hello to Pokey. Pokey is probably thinking he has another dog to train to stay out of his field. Right now Charlie is afraid of donkey and won't go in the field if he is close by. 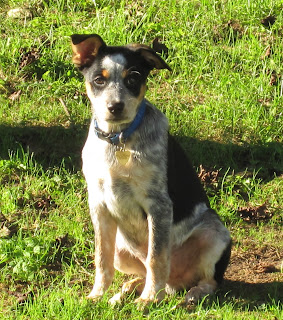 These pictures were taken a few weeks ago and he has grown more since then and his ears are both standing up. At least they do from time to time, they aren't sure how they want to be. Up and pointed like the Blue Heeler or flopped at the tips like the Australian Shepherd. 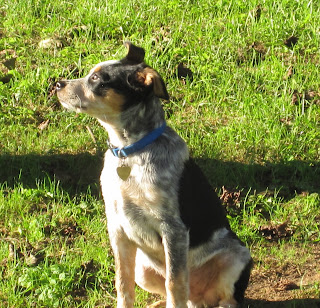 He is probably thinking of what he can get into next. He has a very active mind and is very smart and also has a stubborn streak that is typical of the Australian Cattle Dog. We went round and round trying to get him to learn the down command. He wanted to fight with me, I didn't give up and now he is pretty good at it. I have a lot of work ahead of me with this one, any advise on training this kind of dog would be appreciated!
Posted by jane augenstein at 9/22/2012 11:50:00 AM 3 comments: