Trailering and tieing or not....what do you do?

I have been thinking (I know, scary isn't it?) about trailering and how is the best way to tie a horse or not tie one in a trailer. I was working with Gilly yesterday on trailer loading. 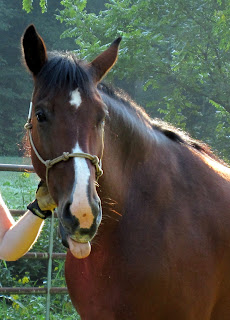 As you know Gilly has his own ideas about how things should be so at first he didn't think he needed to go in. After all, we weren't going anywhere so why bother, he said?

Well, I said, you need to practice so you will be very good at it.

He thought about it for awhile (wheels turning and eyes deep in thought) well, he said what's in it for me if I do?

Then I said, well, only good horses get peppermint treats when they preform well. He nodded his head, sighed and walked in the trailer. Then he got his treat.

We did this a few more times and he did really well and got several treats for being a good horse. We have quite a few discussions like this, Gilly doesn't like all the running around like Clinton and other trainers do, he gets pretty agitated and well....pissed off. And if pushed far enough will jerk the rope out of your hands and run off. So now we discuss things of such importance.

When I trailer Gilly I use my knotted rope halter and 14 foot lead rope and use the Blocker Tie Ring or the Safe Clip so if he needs to pull back the rope will slide some to release pressure. Gilly rides really well, he never moves from where you put him, he doesn't paw, move around, just stands and rides very smooth. I have a stock type slant load but have taken the divider out, Gilly is a big boy and doesn't like to be squeezed. I have heard that some people like to just let their horse loose in the trailer but since this trailer has a front dressing room, I want Gilly tied. The papers that came with the trailer said not to let a horse loose because of putting too much weight in the back. But if you have two horses in the trailer, that would be more weight in the back end....interesting. Well, anyway I prefer to have Gilly tied and really the only room left would be for a Pokey sized animal.

Gilly has no problem with being tied, anywhere. One time when he was not wanting to play let's load in the trailer, I tied him up for several hours. He didn't care, he just stood there. Heck, he was probably napping the whole time! 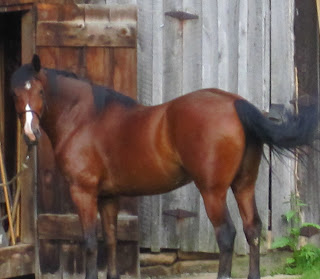 
So the rope halter isn't an issue with Gilly. I have heard a lot of people say that their horses don't like the rope halter, Gilly is one of those horses that is pretty laid back, so much so at time one of his nicknames is "Laid Back Lenny".

But what I really posted this for was to ask all of you what kind of trailer you have, what kind of halter you use when trailering your horse and do you tie or not. Just curious how others do things.
Thanks,

Jane and Laid Back Lenny

Finally the weather has turned to what seems like spring, it will be short lived I am sure.  Mother Nature is like that you know!

I have no new pictures of riding but I have gotten to ride three times; once on Sunday, Monday and yesterday. I have only ridden for about an hour, my legs won't take much more than that. Feels like Gilly must have gotten wider over the winter! Or could it be that I am just out of shape? I fear the latter is probably true. Haven't gotten much exercise except for shoveling snow and poo out of the barn, not the right kind.

I did get a new dressage pad for Gilly, he seemed bothered by the air pad that I have used on him for years. Since his back has changed and the saddle seems to sit better on his back now I found a pad that is very nice.

I stumbled upon this pad in looking for a different saddle, still am not sure I am going to get an all purpose or just keep the dressage. Anyway, read about these and wondered, then talked to a woman who has been showing dressage for 30 years. She said she was given the pad to try and thought it couldn't be as good as they said but when she tried it, she was sold. It's good for the rider and good for the horse. 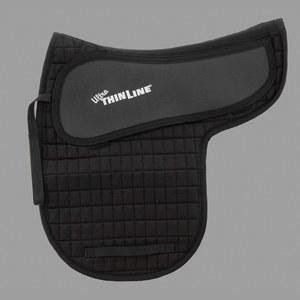 ThinLine Cotton Comfort Fitted Dressage Pad
this is a wonderful pad, I have ridden in the three times and Gilly likes it a lot. The saddle seems to fit much better and I can feel him through the saddle. The other pad was thicker this one is a close contact, I really, really like it! You can throw it in the washer, then hang to dry, the other heaver pad had to be washed with the hose and it took quite some time to dry.
Go to the link and see the videos and read about these pads, many to chose from both English and Western and really they aren't that expensive.

Check out Thin Line Riders to see some of the top riders who use these pads, pretty impressive list. I am more impressed with how Gilly moves out better and feels under me than anything. It has made a difference.

Hopefully I can ride tomorrow, I wanted to today but had things to do in town. Tomorrow is supposed to be even warmer, 66 here today and the weather forecast for tomorrow is 68 and breezy. Poor Gilly though, he has his heavy winter coat on, we will just take it easy. 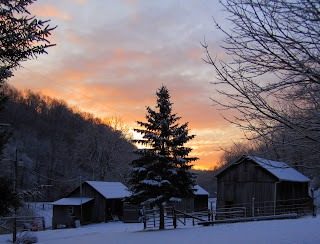 This is what the looked like yesterday morning as the sun was coming up. It had snowed the night before. I had been to a friends house in the evening and it was a white out at times driving back home.
I went out to feed the boys yesterday morning and the sun was shining. A few hours later the snow started falling then another white out. The boys were playing and having a good time. I got a few pictures but missed some good ones. 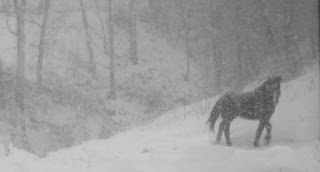 Gilly had just come flying off the hill, jumped the ravine and I caught this picture of him. 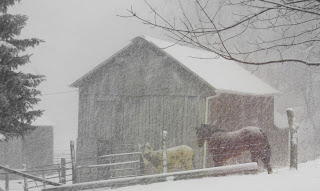 Pokey and Gilly coming to the barn, the snow was beautiful but I am getting tired of the white stuff. 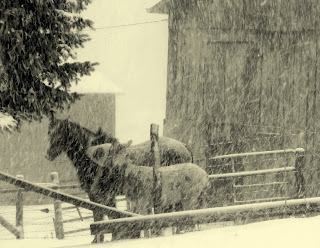 Pokey is saying let's play Gilly as he bits him on the neck. Sometimes I could hardly see them from the house the snow was so thick! 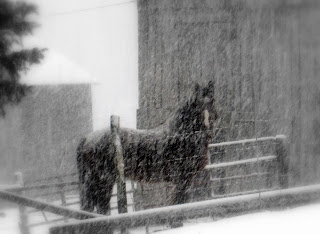 Finally got Gilly's attention so he would look at me as I took his picture. Snowy horse, it was so cold but yet he and Pokey decided to stay out and play in the snow, while I hid in the house and......turned up the heat!!! 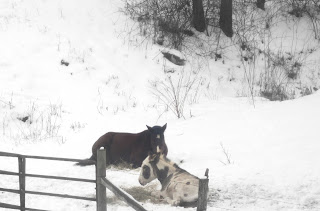 Then in a short time the snow had quit and the boys decided to take a nap....on their hay! They did eat it eventually but a nap was in order first.

After the snow stopped I decided to drive out of the hollow and see all the snow. Ok, I didn't decided my husband called me and said get the camera and drive around and look at this snow!!!  Glad I did....

This is an old barn that is close to home and I really liked the way it looked against the white snow. Gilly and I ride past this one a lot. I always wonder what, if anything is still in the old barn. 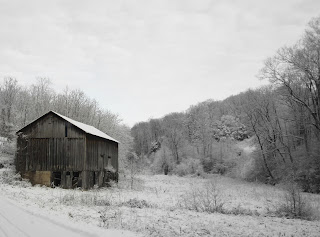 Tall pines along a road that I drive on a lot but with the snow hanging on the branches it looked enchanted. 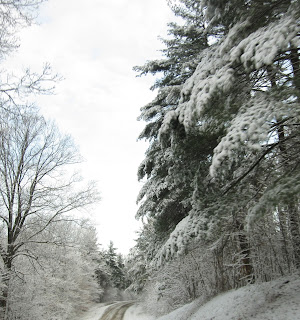 This picture was taken just around the bend from the last one. Note the small out building hidden among the pines. 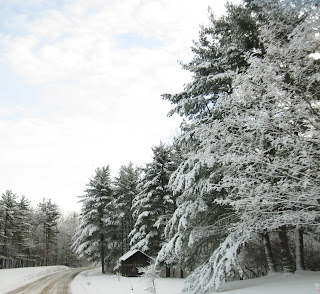 Love the dark pines in this one but the sky was what really grabbed me. Cold out but a really good day for pictures. 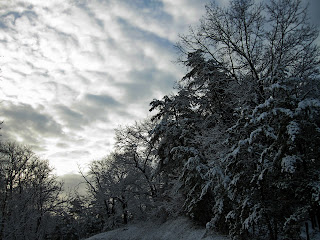 Thought this tree was really pretty silhouetted against the cloudy sky, with snow stuck on the branches. 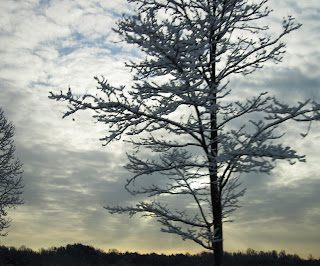 I used my Canon Power Shot SD780, would have loved to use my Canon Rebel but trying to drive a car and take pictures with a big camera that you have to look through the view finder, not a good idea! Yes, I was driving but I held up the little camera and just clicked pictures as I drove, not looking until I came home and loaded the images on the computer. Not too bad, huh? 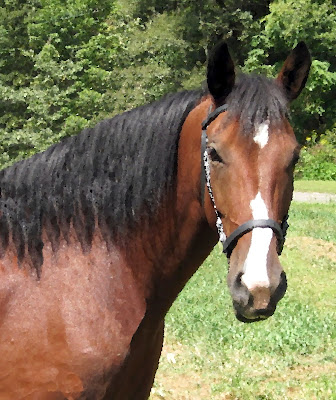