Blogger wiped out my post on Gilly's birthday and also took away all of the comments that you all wrote! :-(
Please comment again so I can put them on the post. Darn it anyway!
Jane
Posted by jane augenstein at 5/13/2011 01:18:00 PM 3 comments: 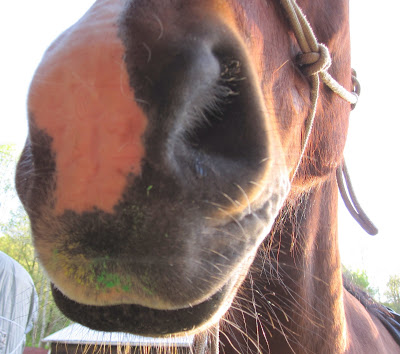 Green icing on my nose! Gilly's 8th birthday was May 5th, I can't believe that I have had him for 7 years! Wow, how time flies. He gobbled the cookies so fast that I didn't really get a good picture of him eating them. Mike didn't get him turned my way as I snapped the pictures. 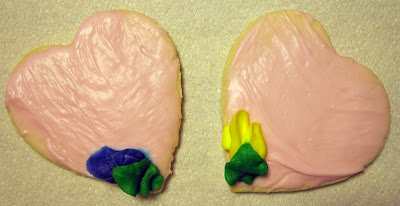 These are the two cookies. Pokey was supposed to get one but he said "NO THANKS! those things looks funny and they taste funny!" Gilly said I'll eat yours Pokey, no problem!

Look at the curve of that neck as he was reaching for the cookie, YUM!!! I should have gotten on the other side to take the pictures. The reason they are all sepia toned is because I was looking into the light and you couldn't really see much detail. The sepia shows more detail. 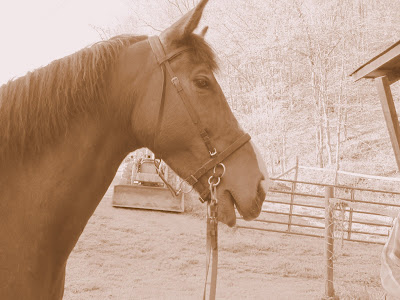 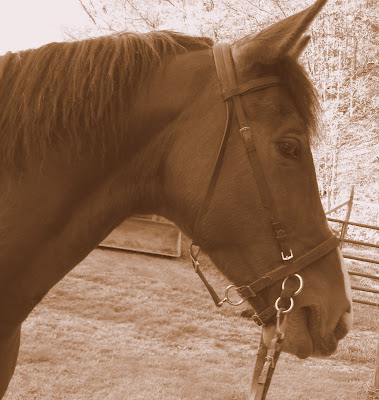 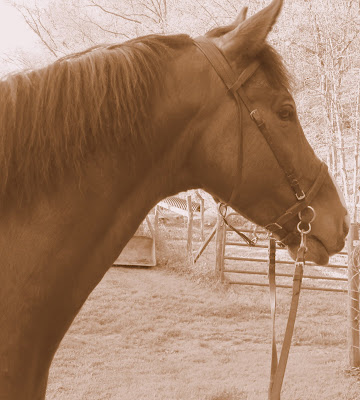 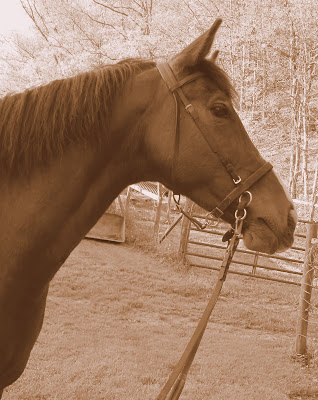 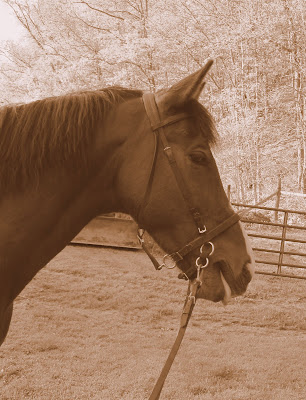 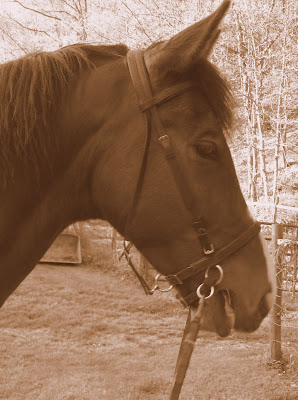 How's that for some funny horse faces? I think the icing got stuck on the roof of his mouth. LOL 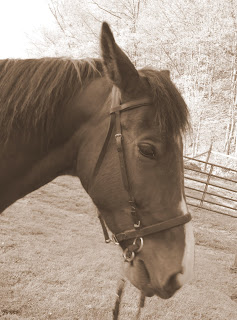 I have been pretty, hum, well, lazy I guess I would have to say! LOL  I haven't done any posting just cause I haven't felt like writing I guess. Oh, I have lots and lots to talk about but just couldn't get motivated to do it.

This winter has seemed like the longest ever and we have had lots and lots of rain. I haven't gotten to ride as much as I would have liked but I have gotten in a few good ones.
I could write about my saddle that I did surgery on. The thigh blocks were so thick that it had bothered my legs for quite awhile so I removed them. Flattened the leather that covered them, trimmed them to fit where the old stitching was and reglued and it feels soooo much better on my legs!!! 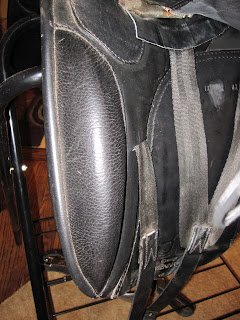 This was before, these things were extremely thick and very hard so... 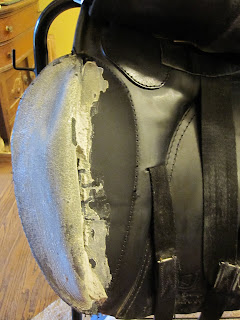 I removed the stitching, pulled off the hard foam pad, that's glue residue that is still on the leather. I picked and cleaned as much as I could, used fine steel wool to rough it up a bit then used contact cement to reglue. 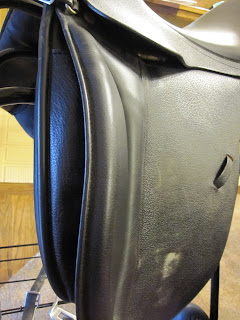 This is before I glued it down. I had just flattened it out to see how it was going to look and I liked it! (I emailed a saddle fitter/repair woman before I did this so I was coached through the whole process) 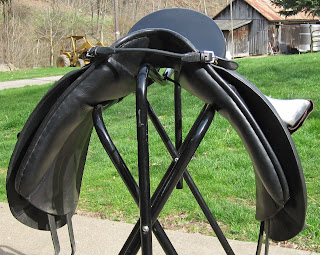 This is how it now looks with the big thigh blocks out. Still a very nice saddle and more comfortable for me. I did this back the first part of March; at first I debated selling it and getting another saddle but I didn't know if I would like a new saddle as much as I like this one. What if the new saddle didn't fit Gilly as well as this one seems to now and me, what if I didn't like the new one as much. This one has sentimental value to me so I doubt if I will ever sell it. 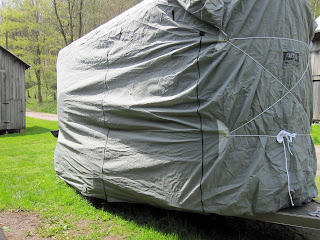 I bought this (Beverly Bay) trailer cover, a few weeks ago to help protect my trailer, I don't have a building to store it in so I thought this might help keep the weather off it. It has a zipper where the door is so you can still enter the trailer with the cover on. It's a little hard to do but you can get inside. It has soft rope ties front and back to help secure it and take up some of the extra fabric. It also has three straps that go under the trailer, from side to side to keep it on when the wind is blowing and it has been blowing down the hollow of late! 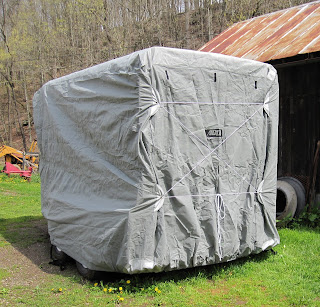 Here is a view of the back, it also has a zipper so you can open the back up. Velcro strips at the top to roll up the back and secure it out of the road. It is supposed to keep the UZ rays from doing damage to the paint, it's also breathable. Is Gilly afraid of it, NO, he tries to find a loose place to grab the fabric and pull on it, so far he hasn't gotten a mouthful!!!! He would probably rip it! 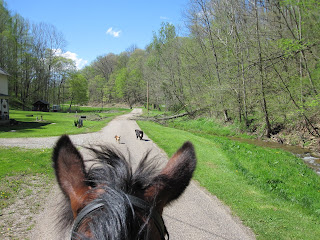 A week ago one of the dogs had woke me up about 4 in the morning, so I stagger out of bed and go downstairs to take them outside. Thankfully I had left the outside flood light on so I could see, well, that is after I got my eyes to open! After a few minutes they were done and I came back in put them back to bed and I headed back to bed. About 45 minutes later, I set straight up in bed, not knowing if I felt something hit the house or heard something that made a BIG noise! I also saw a BIG ball of bright light, then heard noise that I knew what was coming next...poof....lights out. A tree fell somewhere, somewhere close and knocked out a transformer. When the daylight finally appeared looked up and could see a big tree at the neighbors down. What you can see in this picture the top had been cut off and drug away. Gilly and I went for a ride to check it out. 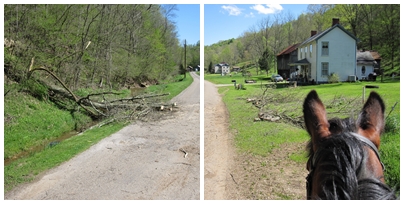 I stitched this picture together, why the white line in the middle I'm not sure but anyway you can see the tree, the road, top on opposite side. Gilly was checking it out, our house is the farthest away. Power was off for several hours and so far no more fallen trees. Not that it wouldn't happen again, so much rain and wind that it wouldn't surprise me if we have more down cause more rain is coming. Riding between rain drops.

Jane and the boys