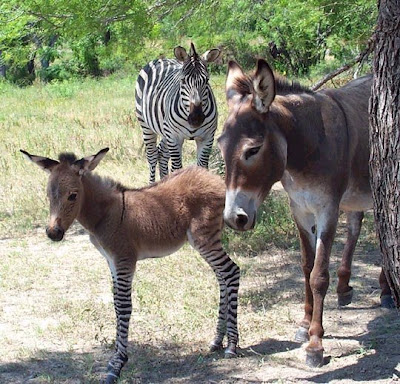 This is for my friends at People's Bank at Frontier Shopping Center in Marietta. We were talking about Zonkey's the other day and so I said I would post some pictures here on my blog. So Brenda, Paula and Ashley, here are the Zonkey's!!! :-)

Someone sent me this picture in an email of a Zonkey, at first I wondered if it was real?? Well, they are and aren't they beautiful? I don't know where this picture was taken but the two below........... 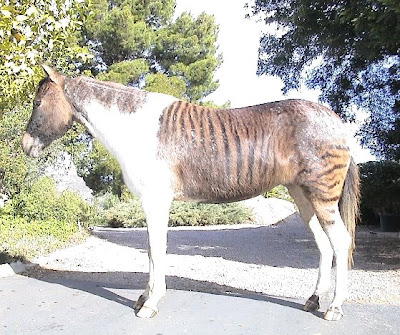 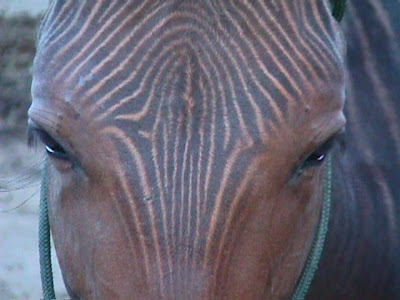 
A zonkey (also known as zebrass, zebronkey,zeasses, zeedonk, zedonk, zebadonk, zenkey, donbra, zebrinny, or deebra) is a cross between a zebra and a donkey. The generic name for crosses between zebras and horses or asses is zebroid or zebra mule. Donkeys are closely related to zebras and both animals belong to the horse family. Zonkeys are very rare.
(from Wikipedia)


A zorse is a cross between a zebra and a horse. The zorse takes the color or dominant color gene of the mare and the zebra sire gives it stripes Zorse Color Info . Photo Album A hebra is a cross between a zebra mare and a horse stallion – the rarest. Horse stallions as a general rule do not like to breed zebra mares. Zebra stallions usually must be raised in a special environment to breed horse mares.

A Zonkey is a cross between a zebra and a donkey. The zonkey takes the color or dominant color gene of the jennet and the zebra sire gives it stripes. The zonkey is generally more easily bred for than the zorse as the donkey and zebra both communicate behaviorally using very similar language, whereas the horse language is somewhat different than the zebra's. (Taken from the "Spots N' Stripes Ranch")

Gorgeous zonkey photos. I love the one with the forehead pattern. I just saw some of these creatures at a farm a few weeks ago.
Very cool!

Don't you want to plant a big fat kiss on those stripes between its eyes?

Thanks for your visit Jane to my Blog...Great Photo Shots!!! Zonkey's...Wow are they Beautiful...The 'FACE' seems like I wish I could just reach right out and pet him (OR Her)...
Thanks for sharing your work...
Best...Marilyn

Well, going to the Spots and Stripes web site was a good way to blow 45 minutes...thank you...the Caspian horses enchanted me along with all the strange flashy hybrids. Wow. Like a tiny Arab!

Mary, yes, yes, yes, I would love to kiss that sweet face! The design on the face looks like it was air brushed on.........it's just breathtaking!!!

Julie,
boy, would I love to have a little striped legged zonkey to go with Pokey! LOL
Glad you enjoyed the site, great photos of some great animals, huh?

I think having a zonkey for Gilly and Pokey is a great idea. Jane, thanks for the lesson you posted. They say the way to beat brain aging is to stay engaged and learning all the time. And this morning, thanks to you, I learned a lot. These are beautiful animals.

Hi again ! I just added your blog to my favorites list, so I'll be reading ! Love your hooked rugs by the way !