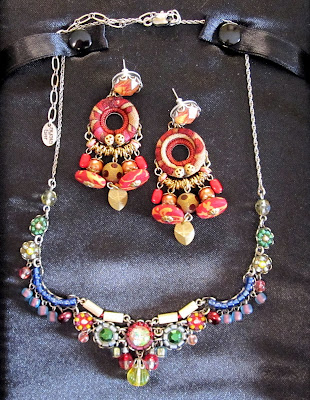 Mike got me earrings to go with the necklace he got me last year for Christmas; made by the same woman, Ayala Bar (click her name to see her site) 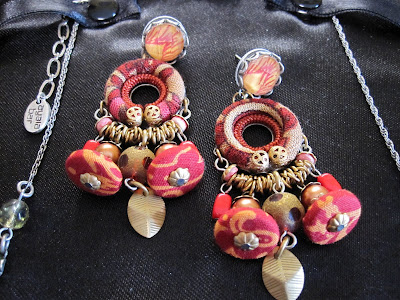 Close up of the earrings, that's actually fabric on some of the beads. Very interesting pieces, I love them! 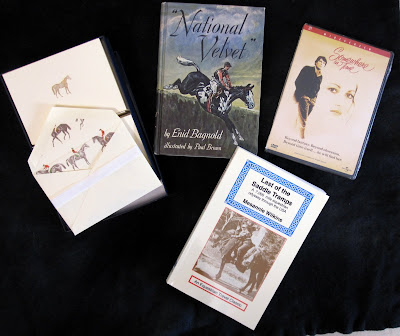 Things my daughter got me; horse note cards; a DVD that I love, Somewhere In Time; an old copy of National Velvet; and Last of the Saddle Tramps! This is a wonderful book, I couldn't put it down! A woman back in 1953 at the age of 63 left Maine on a horse and crossed the USA to travel to California.....amazing!!! (I will tell more about it in another post.) 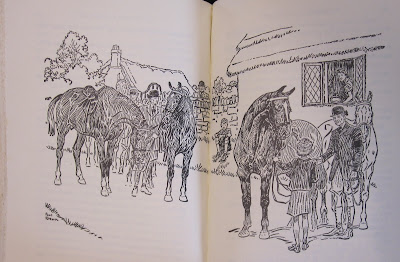 Two illustrations from National Velvet. This book was first printed in 1935; love the pictures in it. Love old books, Jennifer found this at an antique mall. 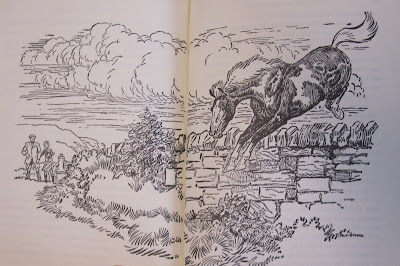 What a jump, what a horse! I remember reading this in junior high. It will be fun to read it again because I don't remember that much about it! LOL well, except it's about a horse, of course! 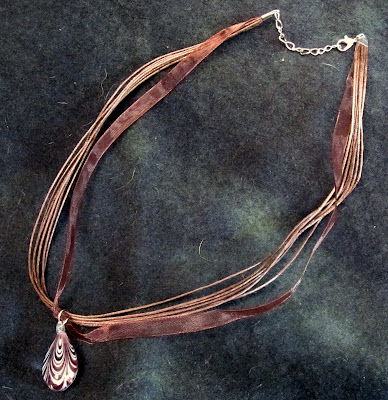 My friend, Darby, who is a knitter made this felted wool bowl, that looks somewhat like a little hat! Two bars of handmade soaps that smell heavenly and some sweet almond oil lip balm! YUM!

I am a little bummed today the weather here is very heavy overcast and raining which is suppose to turn to snow later on. I probably won't get to get any pictures of the "Blue Moon".....but I will try. The sky could clear up and I might get a shot; my tripod and camera are set up and ready to go. 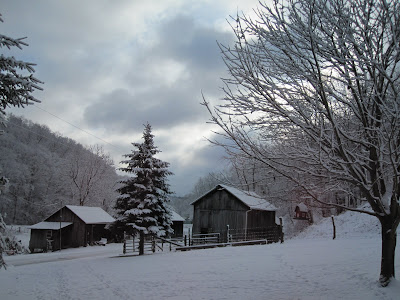 Friday night, late it started snowing some; not much at first but it kept it up all night so in the morning we about 4 inches of snow! Yesterday and today it had been overcast and some interesting clouds out there. 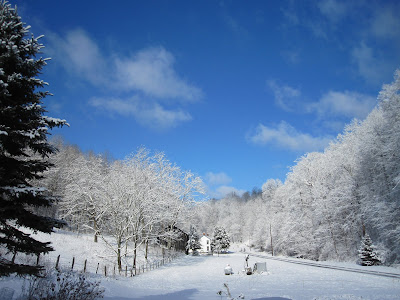 Then the sun came out and boy! Talk about knocking your eyes-out-blue!! WOW! (these photos were taken with my little Canon Power Shot) This is taken from our side door looking up the creek to the neighbors. That's our hay field that the boys have been in lately. The pump jack is fenced off from Pokey-The-Termit's little teeth too. I am sure he would chew the hoses off the tank...and...Gilly would feel obligated to help! 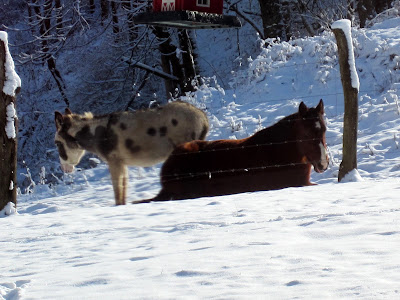 The boys sunning themselves, Gilly had been laying this his head stretched out but just as I got ready to snap the picture he raised his head. Bad Gilly!!!! 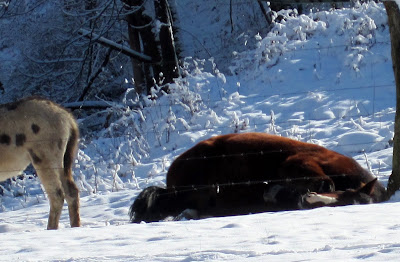 Awwww, now for a roll in the snow (he is not as close to the fence as it looks) 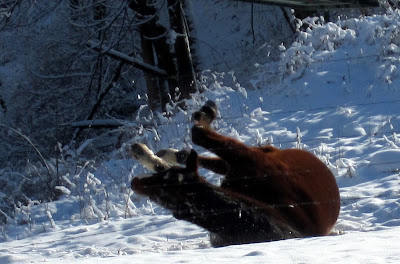 Here we go all four in the air! If I had turned the camera to action I could have gotten more of the roll but this one is pretty good! 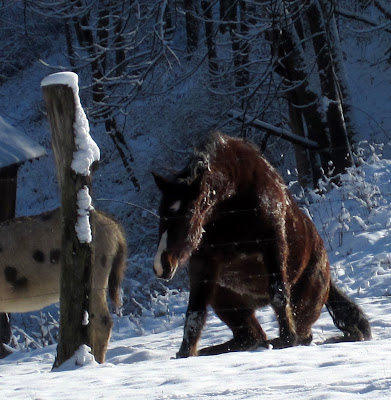 LOL....really love this one! Looks like he is sitting back on his haunches!
"Ugh...I think I can get back up! Snort!" 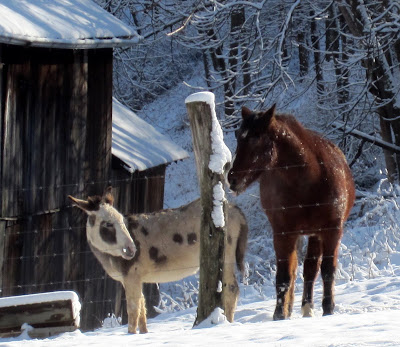 "Yes, I can and you are too fat to roll completely over....I on the other hand can roll over many times! But....I just don't want to today! snort...dumb horse!
I am the ASS and I rule this farm!!!"

Sorry to say I have no pictures in this post, didn't have time. Yesterday I was making Hot Pepper Butter which is mustard, hot peppers, green peppers, onions, sugar and vinegar cooked down makes some yummy dip for chips, pretzels and spread on ham sandwiches. I was making this for Christmas presents; when I finished I had to head outside to fill the bird feeder and noticed that it was pretty nice out. Even though the temp was only 33 degrees the sun was shining and it felt good out there.

Well, hey, I thought it's pretty nice out here how about a short ride on Gil! I looked up in the field and YIPPEE he wasn't very dirty at all so......back into the house for my coat, hat and gloves. I called Gil and he came, nickering as he moved toward the gate. I had grabbed his bridle with his new bitless noseband; he put his head right in it, unlike he did with the bit. Did a quick brush, he had burrs in his tail but what the heck, we only had about an hour before the sun went over the hills. When the sun goes over the hills here the temp starts dropping so I was in a hurry. Saddled up with the western saddle; got him to do some side ways, backing and a little trotting on the lunge line. Can't use the round pen, frozen. So I hopped on and took my chances! He was pretty full of himself as we started off.

When we got to the neighbors he decided he was NOT going anymore. Started backing up, rather fast and little hops like he wanted to rear! Well, we aren't having any of that so I got off, real quick! I had hooked a lead rope to the halter ring that came with the bitless noseband, great idea! He wanted to back up so we backed about 100 feet to the bridge and then some! He decided that backing wasn't really what he wanted to do. I found a high spot in the road bank and climbed back in the saddle. Gilly decided that going forward was a GOOD idea now! Good boy!

We rode on up the road without incident. He was moving at a nice walk and the bitless noseband worked fine. I think I still need to adjust the chinstrap a bit but he did really well with it. I am glad! I could feel my feet starting to get cold so I thought I had better head back toward the house. When we got back to the barn I decided just a few minutes more so we headed back the hollow to the shed. As we crossed the creek I wished I had brought the camera, there was ice frozen along the edges that really looked neat. Beautiful but cold.

Back at the barn after I unsaddled I realized I had forgotten to get the rhythm beads to put on Gil. DARN!!! I tied him up and went back to the house to get them; I can at least put them on him and trot him down the road a ways. Just as soon as he started to trot, he really arched his neck and flagged his tail, bouncing along so the bells would really jingle! I think he really likes his bells......hopefully next time I get to ride I will remember the bells!

Later that night I was looking though my horse catalogs for winter boots. Found some!!! Ariat, my favs, tall boots, insulated, back zipper, stylish.....Merry Christmas to me! LOL And they will be here before Christmas....so they say! Doesn't matter anyway, I just needed some warm boots. What do ya think? Like 'em? 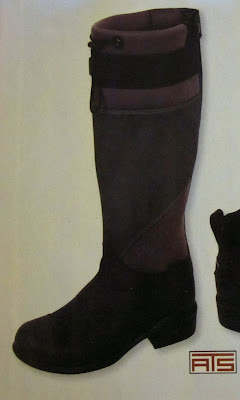 Not sure when I will get the opportunity to ride again. It's raining outside right now and snow is on the way; temps are dropping. We are supposed to get up to 3 inches of snow and then more tomorrow. We may get a white Christmas after all! 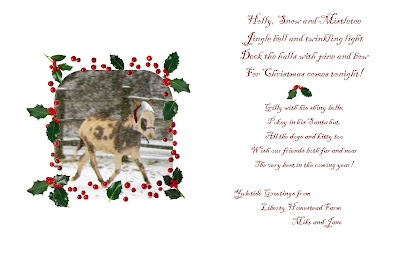 I have been absent for awhile because 1.) I've been lazy 2.) I've been busy (playing with the computer graphics, see above)
I think LAZY is the number one reason I haven't been on here! LOL I have really wanted to post about my new bitless nose band I got for Gilly but haven't had the right weather or the time to ride so I can see how he does with it. If the weather will warm up a bit, I am NOT a cold weather rider. The weather here has been a damp cold, which I hate, it goes right through your bones, well mine anyway......so I stay inside and wish I could be out there riding! (sigh)
Today I have pepper mustard to make, it's yummy stuff, for Christmas gifts, cookies to bake and presents to wrap and more cards and gift tags to make! Hard to believe that a week from today it's Christmas Eve!!!
Also we have been working on our downstairs bathroom! YIPPEE! Soon we will have a bathroom downstairs and the room finished! Then I am hoping that we have all the home remodeling DONE! Not one of my fav things to do and this one has really taken a long time. Tons of work that was done before we could even start on it. LONG story on that! A lot of the work has been behind the scenes and no one can see it, duct work for furnace, plumbing, wiring all done by Mike....I don't do crawl spaces! NO, NO....too many creepy crawlers under there for my liking....that's man's work! LOL

Enjoy the blingy card I made and click on the picture of Pokey to see it larger so you can read the writing!(if you click on Gil's picture it takes you to an ad, I couldn't get it off the picture! ugh!)

HAVE A WONDERFUL CHRISTMAS!!!!!