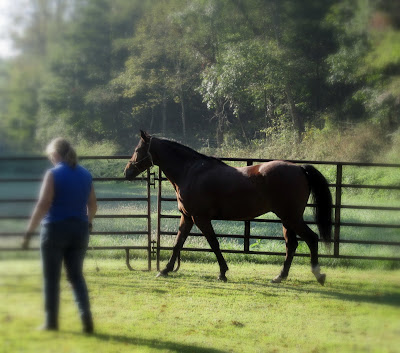 Yes, I am still around but me and Gilly have been taking a short break. We'll be back in a bit!

Finally the mats are in the trailer and... 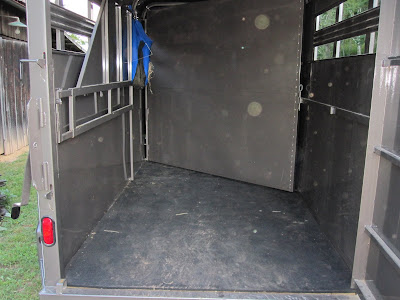 Finally the mats are in the trailer!!! Husband got them cut and in for me, I helped a little but he did all the cutting, what a pain but....now they are in! He also made a new piece to hold the divider wall. The original one had a piece that I was afraid Gilly might get hooked on, maybe not but if it's something to get hurt on a horse can find it! 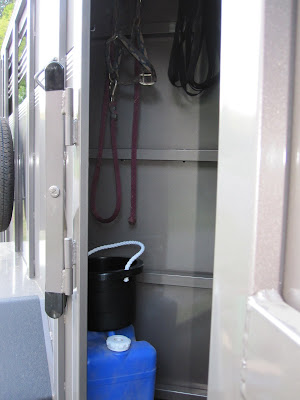 Here is peeking into the tack room, Gilly's H2O container and bucket right by the door. It only holds 7 gallons but it will be enough for now, we aren't planning on going anywhere where we need more. 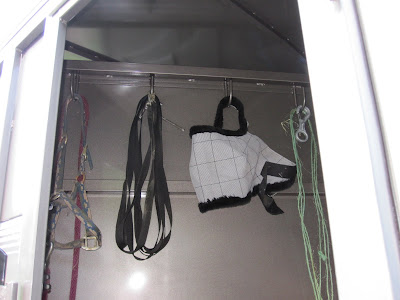 Above the water container; flat halter and lead and extra one, flat lunge line, fly mask to put on Gil while he is riding in the trailer to keep stuff out of his eyes (thanks Kacy for the tip!) some baling twine, one never knows when that may come in handy! and a safety snap. 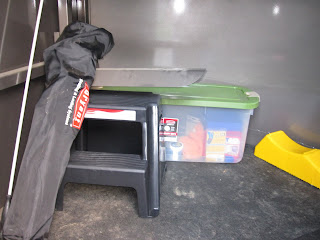 Bag chair, step stool, tire changing "thingy" ???? can't think what it's called....LOL  then the tote with all the rest "stuff"! 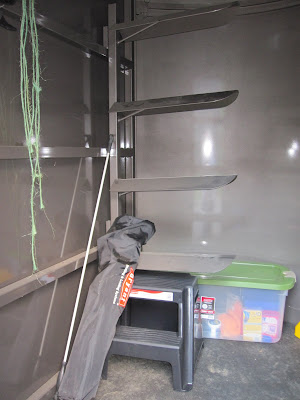 Here is a shot farther back. (looks like I need some more stuff in here!?)
See all the dust on the saddle racks? I am hoping that by putting the mats down some of the dust will be gone because the cracks between the floor boards was wide in some places. Now I have to find something to stuff under the move-able wall to keep Gilly from knocking sawdust under it.
Oh, yes, I have gotten to ride every day last week, it was great and Gilly did well. We worked on neck reining some more and he is really getting it! I used it when I was working on sitting his trot; holding onto the grab strap with my left hand and had the reins in my right. before it was hard to steer him but now just some pressure on his neck and he turns and pretty darned good too! What a good boy he is; he was pretty easy to train too, I just put the rein on his neck with some pressure and used some pressure with my leg, he caught on quickly!
Only a few darned die hard horse flies left and even fewer cause I killed more, mashed those suckers, dead!!! LOL
Posted by jane augenstein at 9/06/2010 10:08:00 PM 15 comments: