Pokey gets a new fly mask and boys at play 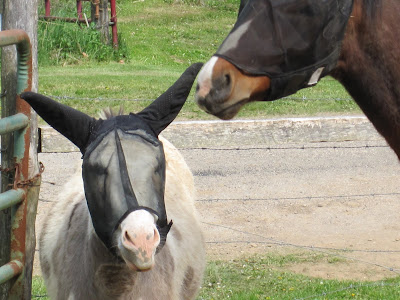 Pokey got a new fly mask awhile back but the ears were for horses so I had to do some surgery on it. It said it was for a small horse, I think it would have fit Gilly so I took a tuck in the front cut off the small ears. They just weren't right for those majestic donkey ears, found some material to make them for Pokey's ears sewed them on and there you are donkey mask. But then it wasn't an hour before Gilly had pulled it off him! Bugger! I had to take it back off Pokey and redo the velcro; the jaw pieces wanted to overlap way under his jaw. Move the velcro then put it back on, it stayed! 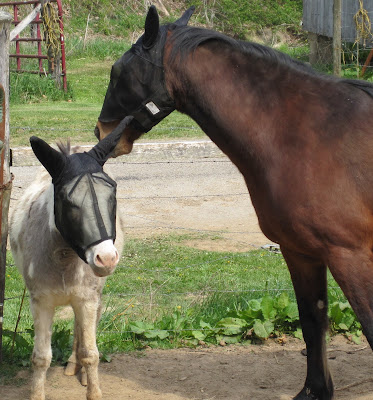 Pokey is not too happy with Gilly pulling on his face mask and getting grass slobbers on it! Pokey likes getting it put on because he will come over and hang his head to be suited up!

Gilly says, "Who me? I didn't do anything! Just look at how innocent I look! :-D" 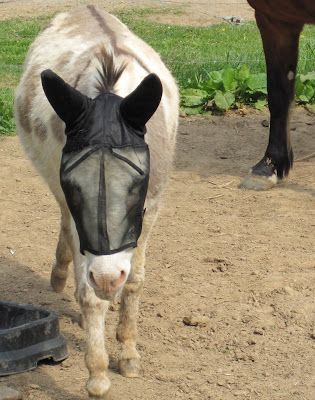 Pokey decided he was leaving and headed up the hill behind the barn. I went back in the house, came back out a little later to fine this going on! Had to run back in for the camera! 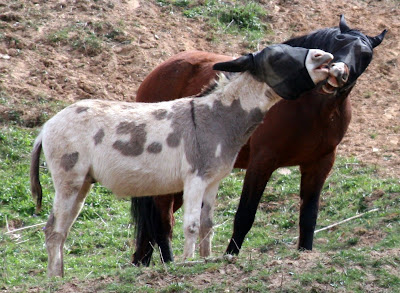 Click on these pictures to make them larger to see the goofy mouth expressions on these two!
They play pretty rough, ouch! 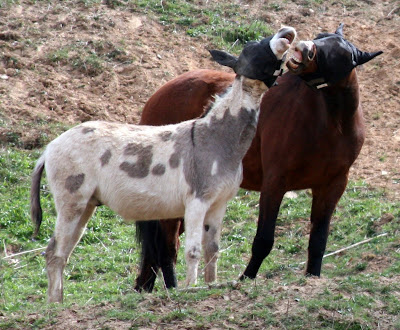 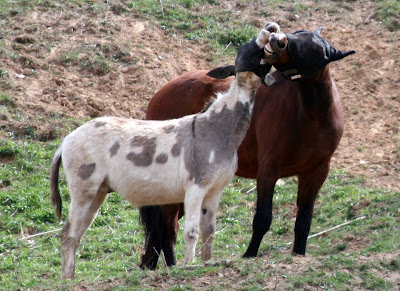 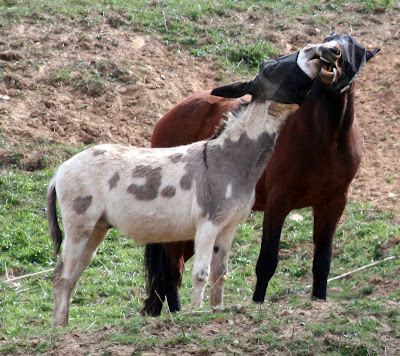 Pokey is giving me the eye here, funny donkey! 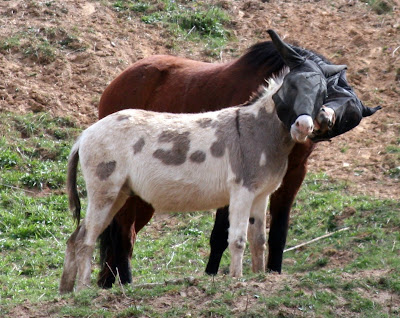 Gilly is trying again to rip the fly mask off!!! Bad horse! 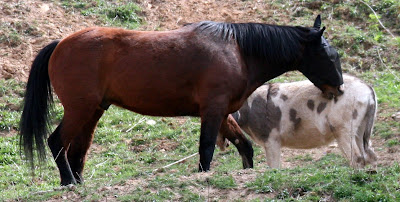 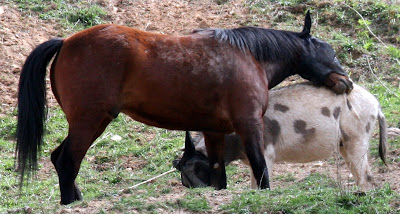 Oh, OUCH!!! Look at the twist in Pokey's hinny as those teeth pinch a piece of skin! But then Pokey is biting Gilly on the leg as it's going on!
Boy, those critters have some tough hide!!!! 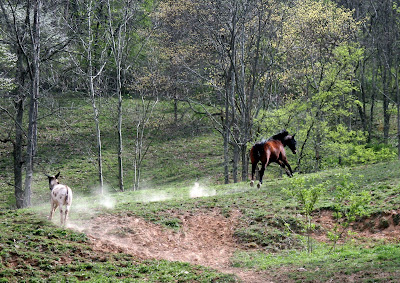 Gilly just ran off and had a bucking fit here, look at the dust clouds following him. 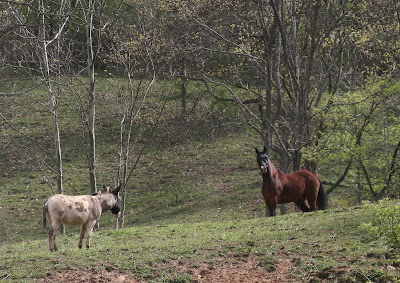 You know, I find myself distracted about 90% of the time when I go outside to plant or do some other chore, BY THE ANIMALS. They are always doing something that gets my attention, or else they just want some attention from me! They have managed to divert me from the errands at hand for over an hour at a time! Bad animals! LOL

LOVE your pics of Gilly and Pokey pulling on each other's fly mask. So cute!!!

LOL Gilly taking off. Silly boy. Gotta sew reflective tape on those suckers when they pull em off they are easy to find.

What a pair. Love the stories about them.

Oz Girl, yes, they are very distracting and I can't stop myself from looking and laughing!! They are a pair, aren't they?

Sydney, by golly what a good idea, reflective tape! I'll have to try that.

Jacque, they are interesting to write about, always into something!! LOL

Katharine, yes, those BIG ears really make for an interesting mask. I have to take the velcro off Gilly's and make his smaller about the jaw area also. I also had to repair a place on Pokey's mask were Gilly chewed a hole in the middle of his forehead! Bad horse!!!

Too cute!! Those two are quite a pair! Nice job on the fly mask for Pokey though.

I screamed with laughter over the first scan of Pokey in his fly mask! He's a lucky little ass to have a mom that will take the time to customize his mask. Love your stories of the two of them!

Pokey is the cutest thing Jane!!! I just LOVE him!

Great photos! I've never seen a donkey in a fly mask. Great job! You could start a business with this:)

Giggle Snort....What a wonderful post...whahahahaha I love the fly mask fun....goofy boys have Spring fever for sure. Wow that one nip made me squirm in my seat....OUCHCHCHCHCY!!
How are you hon??
Hugs, Sarah

Heart of a Cowgirl said...

Great job on the fly mask alteration. Now Pokey just needs some cool shades and he's set. :)
Those 2 are too cute playing around together (I almost said horsing around... sorry Pokey!)

That photo series is adorable! :)

Oh my goodness! That just had me in stitches! What a bunch of silly goobers!
This is what it's all about....the entertainment factor of our animals. Love this!

And the fly masks look great! You did a brilliant job with Pokey's mask. I wonder why they don't sell donkey masks anyway.

Thanks for making me smile today :)